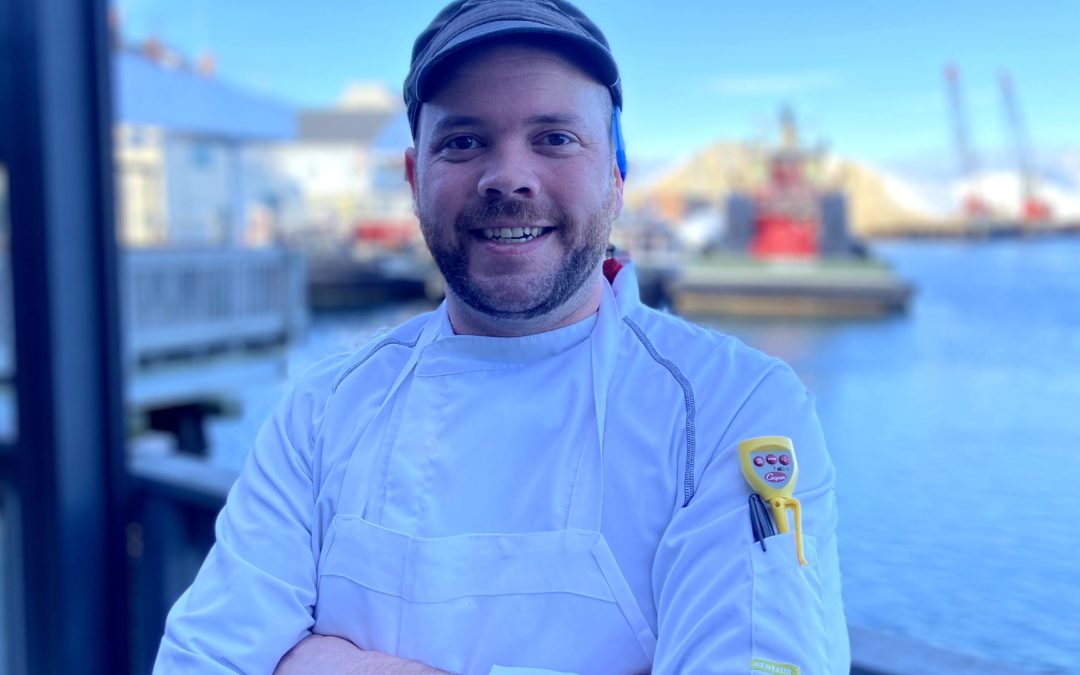 Brian Stuart, a friendly and talented chef whose appetite for culinary artistry was inspired by his grandmother, is excited to be doing what he loves best in the compact, high-energy kitchen nestled not far from center stage at Jimmy’s Jazz & Blues Club.

Newly promoted to Executive Chef, Brian had served as Executive Sous Chef since the club’s grand opening in historic downtown Portsmouth, NH, in September 2021. He recently took a few moments to talk about the enthusiasm and creativity he brings to the job of making dining at Jimmy’s an experience that is memorable and fulfilling.

Seated next to the fireplace with a pen tucked under his cap behind his left ear and a food thermometer always at the ready in his breast pocket, he says, “I am thrilled for the next chapter of my culinary journey.”

“As the Executive Chef of Jimmy’s, I’ll be working hand in hand with Chef Nate (corporate chef for The Labrie Group’s growing family of restaurants) to manage the execution of our meals, from planning, to plating, to serving to our guests.”

“Nate and I are sourcing local ingredients and establishing relationships with New Hampshire farms. Going out and seeing how these super fresh ingredients will make their way to the plate, paired with Nate’s enthusiasm, is infectious. It’s incredible.”

From the Farm to the Plate: Dinner is Served at Jimmy’s

Together, the chefs and their team blend southern-influenced styles, techniques and spices; fresh, locally sourced ingredients; and personal connections with area farmers and fishermen; to create their own special version of New Hampshire-inspired cuisine.

“I’m looking forward to working alongside Nate, expanding my understanding of Creole cuisine, and continually making myself a better chef,” says Chef Brian. “Nate and I are continually looking at it from all angles to figure out what works best for us, in terms of behind-the-scenes execution, to ensure that our guests’ experience is perfect from beginning to end.”

Chef Brian’s ability to simultaneously focus on the big picture and the small details comes from many years spent learning and honing his craft, starting with his very first summer job as a dishwasher at nearby Wentworth Country Club in New Castle.

A New Hampshire native born in Hooksett, Brian and his family moved to Portsmouth and got his first taste of working in a kitchen at age 16. “My parents made me get a summer job and, while I didn’t think much of it at first, I ended up working really hard at it. The Executive Chef that hired me saw my work ethic and potential, and gave me opportunity to learn to cook and grow in my role. He and I still keep in touch today. He’s like a brother to me.”

An opportunity to serve as a banquet chef at Tewksbury Country Club took him to Massachusetts, where he learned how to coordinate major functions at a venue capable of seating 600 people at once and built a record of success that earned him a promotion to Executive Sous Chef.

Back home, his hard work — coupled with a dose of serendipity — resulted in a job at the River House, the popular waterfront eatery owned by Michael and Peter Labrie, perched along the Piscataqua River on Bow Street. “I knew the River House needed a sous chef, and it turns out I had met the hiring chef 10 years earlier. I met with him and the Labries; they brought me in and the rest is history. ”

And it is history in the making at Jimmy’s, the spectacularly restored 1905 arts venue where patrons enjoy dinner-and-a-show experiences that pair creative cuisine with the musical stylings of world-class jazz and blues performers.

Today, Chefs Brian and Nate are excited about building on the success of the restaurant’s signature dishes and spicing the menu with new entrées. One best-seller is the Salmon Etouffee, a dish that Brian says “takes an ingredient (salmon) that, we as New Englanders, are very familiar with and introduces traditional southern flavors from New Orleans in a way that truly embraces the concept of a New Orleans jazz supper club.”

Other favorites include Creole-inspired dishes like Chef Nate’s signature gumbo. Speaking of the gumbo, Brian says, “I’ve spoken to a lot of the musicians who are from the New Orleans area and they say, ‘This reminds me of my grandmother.’”

That’s music to the ears of this veteran chef, who is at once nostalgic and reverent when he talks about how his own grandmother inspired his future life as an executive chef.

“One of my fondest childhood memories is when I would run up to the door of my grandparents’ house to be greeted by the smell of what Nana Turbyne was making for supper. That excitement and love of my grandmother’s cooking is not only what started but what still drives my passion for food,” he says, recalling times spent making Christmas cookies together when he was a boy and breathing in the intoxicating aromas of such dishes as her fish or corn chowder.

“She introduced me to all of these flavors and smells. I wouldn’t be here if it wasn’t for my grandmother,” he says. “Food, for me, is a labor of love.”