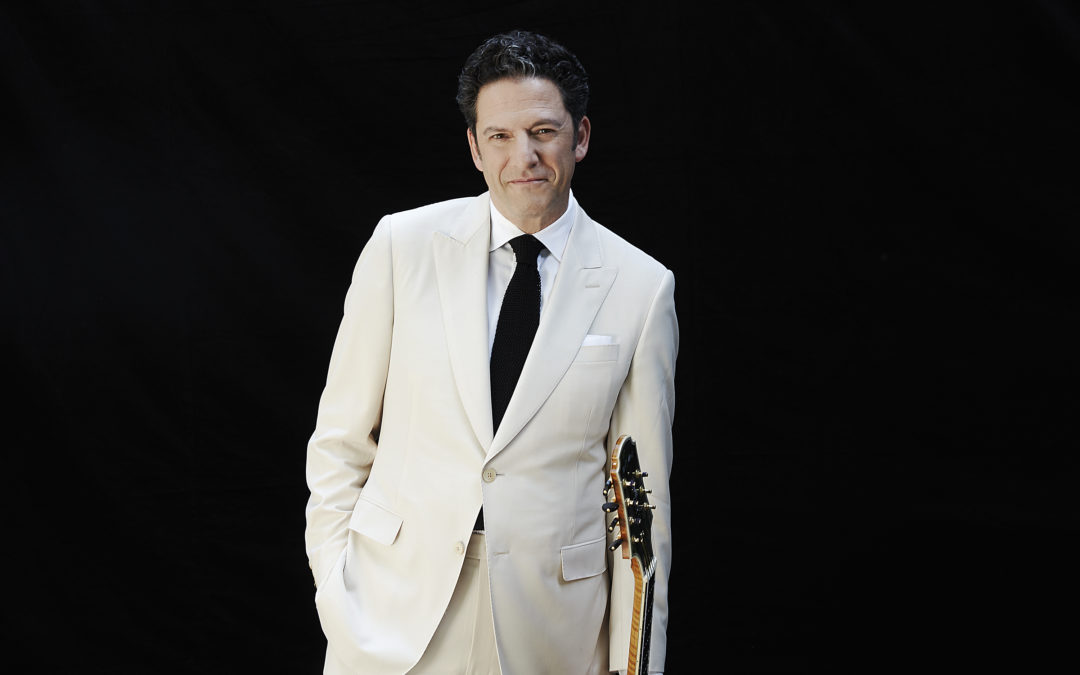 Jimmy’ s Jazz & Blues Club Features GRAMMY® Award-Winning Producer, Guitarist & Singer JOHN PIZZARELLI on December 16 at 7:30 P.M. World-renowned guitarist and singer John Pizzarelli has been hailed by the Boston Globe for “reinvigorating the Great American Songbook and re-popularizing jazz.” The Toronto Star pegged him as “the genial genius of the guitar.” And the Seattle Times saluted him as “a rare entertainer of the old school.”

Established as one of the prime contemporary interpreters of the Great American Songbook, Pizzarelli has expanded that repertoire by including the music of Paul McCartney, Joni Mitchell, Neil Young, Tom Waits, Antônio Carlos Jobim and the Beatles. His themed shows, often performed with his wife Jessica Molaskey, suggest there is no limit to Pizzarelli’s imagination or talent.

While plenty of jazz greats influenced his work—Benny Goodman, Les Paul, Zoot Sims, Clark Terry and Slam Stewart, among others—Cole has been Pizzarelli’s hero and foundation over the last 25 years. He devoted two albums to his music, ‘Dear Mr. Cole’ and ‘P.S. Mr. Cole’.

Pizzarelli’s solo recording career started in 1990 with ‘My Blue Heaven’ on Chesky Records. He played clubs and concert halls on the jazz circuit, opening for such greats as Dave Brubeck, Ramsey Lewis and Rosemary Clooney. In 1993, he was honored to open for Frank Sinatra’s international tour and then joined in the celebration for his 80th birthday at Carnegie Hall, bringing down the house singing “I Don’t Know Why I Love You Like I Do” with his father accompanying him.

Pizzarelli has also married songs from great pop songwriters of his own generation with traditional jazz arrangements and melodies. His album ‘Double Exposure’ united the Beatles and Lee Morgan, Tom Waits with Billy Strayhorn and the Allman Brothers Band with the style of Wes Montgomery. As he told the Wall Street Journal, “I asked myself a couple of questions: ‘How can we take the style we do and communicate it to people who grew up on Gershwin and people who grew up on the Beatles? How do we communicate jazz to the non-jazz listeners?’ The Guardian in the U.K. was among the many publications to praise the album: “The arrangements are sharp and witty, the singing deceptively easygoing, and the guitar playing just terrific. It’s a delight.”

“We are excited to bring GRAMMY® Award-Winner John Pizzarelli to Jimmy’s Jazz & Blues Club. John’s contemporary interpretations of the Great American Songbook are awesome!” said Suzanne Bresette, Managing Director of Programming at Jimmy’s Jazz & Blues Club. “John is a wonderful entertainer and he will create a very memorable evening of jazz music for the sold out event at Jimmy’s.”

Tickets for JOHN PIZZARELLI at Jimmy’s Jazz and Blues Club on Thursday December 16 are SOLD OUT.