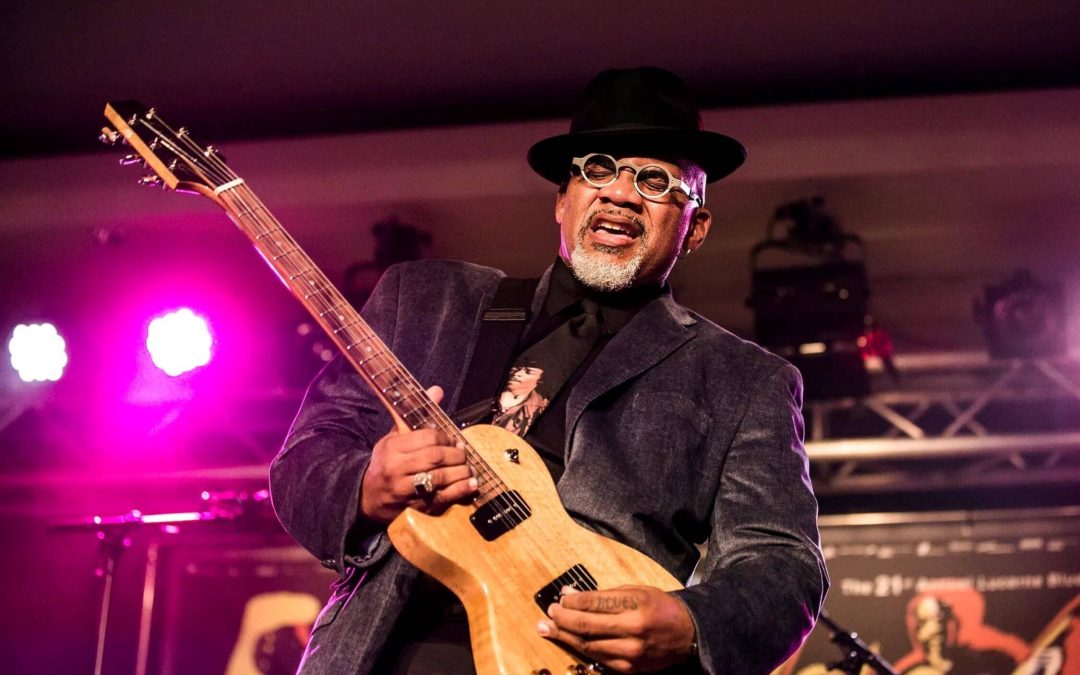 “‘Toronzo Cannon is now one of the stars of the Chicago scene.”— BLUES BLAST MAGAZINE

“A smoking hot guitarist, vocalist, songwriter…Cannon is one of the best songwriters working in roots music today…”— ROCK AND BLUES MUSE

In 2016, with the release of ‘The Chicago Way’, Toronzo Cannon burst onto the international stage as one the most electrifying bluesmen to emerge from Chicago in decades. His live performances earning him heaps of critical praise and hordes of wildly enthusiastic fans. Cannon has played major cities all over the U.S., Canada, and Europe. He recently performed for the first time in Japan, delighting and surprising audiences with one unforgettable gig after another. Cannon has played the Chicago Blues Festival on ten separate occasions, initially as a sideman, then as a special guest, then as a sidestage band leader and finally numerous times as a main stage headliner.

Toronzo Cannon’s songwriting is inspired by his deep Chicago roots. His songs tell timeless stories of common experiences in uncommon ways. Between his searing chops, soul-satisfying vocals and vibrant and distinctive original songs, Cannon has grown from being a local attraction to become a world-renowned torch bearer for the blues. PBS Television’s Chicago Tonight sums it up like this: “As a guitarist, singer and songwriter, he drives the sound of Chicago blues from the city to blues clubs and festivals around the world.”

Toronzo Cannon was born in the Windy City and grew up in the shadows of Theresa’s Lounge, one of the city’s most famous South Side blues clubs. As a child, Cannon would stand on the sidewalk outside the door, soaking up the live blues pouring out while trying to sneak a glance inside at larger-than-life bluesmen like Junior Wells and Buddy Guy. He also heard plenty of blues growing up in his grandfather’s home, and listened to Soul, R&B and Contemporary Rock on the radio.

Cannon bought his first guitar at age 22, and his natural talent enabled him to quickly master the instrument. Although his initial focus was reggae, he found himself increasingly drawn to the blues. “It was dormant in me. But when I started playing the blues, I found my voice and the blues came pouring out,” says Cannon. He absorbed sounds, styles and licks from Buddy Guy, Albert Collins, Hound Dog Taylor, B.B. King, Albert King, Freddie King, Jimi Hendrix, J.B. Hutto, Lil’ Ed and others. Although influenced by many, Cannon’s biting, stinging guitar sound is all his own.

Almost immediately upon the release of his album ‘The Chicago Way’, national and international media took notice. CNN filmed Cannon leading a tour of Chicago blues clubs and then broadcast the piece around the world. England’s MOJO magazine declared ‘The Chicago Way’ the #1 “Blues Album of the Year” (2016), as did the Critics Poll and Readers Poll of Living Blues Magazine in their annual poll. In 2017, the world champion Chicago Cubs invited Cannon to throw out the ceremonial first pitch, and the album and Cannon were Nominated for 4 Blues Music Awards, including “Contemporary Blues Male Artist of the Year”, “Song of the Year” (Walk It Off), and “Blues Album of the Year”.

Jimmy’s Jazz & Blues Club’s 2022 Schedule of Shows included 9 NEA Jazz Masters, 52 GRAMMY® Award-Winning Artists, 46 Blues Music Award-Winners, and a comprehensive list of talented musicians with 575+ GRAMMY® Award Nominations amongst them. Tickets for the TORONZO CANNON at Jimmy’s Jazz & Blues Club on Friday January 27 at 7 & 9:30 P.M., as well as the current list of 2023 shows, can be found on Ticketmaster and Jimmy’s Online Event Calendar at: https://www.jimmysoncongress.com/events.

The mission of Jimmy’s Jazz & Blues Club is to provide guests a one-of-a-kind, world-class experience featuring serious jazz and blues music served with exceptional cuisine. Jimmy’s Jazz & Blues Club features a spectacular and visually breathtaking environment engineered to deliver the highest quality acoustics while utilizing state-of-the-art production, sound and lighting technologies. Jimmy’s Jazz & Blues Club is located within a beautifully restored 1905 building at 135 Congress Street in the heart of historic downtown Portsmouth, New Hampshire. For more information visit www.jimmysoncongress.com or follow us on Facebook at https://www.facebook.com/JimmysJazzBlues and on Instagram at https://www.instagram.com/jimmysjazzblues/.

An architecturally breathtaking center of arts and culture in the heart of historic Portsmouth, New Hampshire, Jimmy’s Jazz & Blues Club offers a rare and spectacular venue to host important corporate functions, weddings, intimate or large-scale social gatherings, private parties, and memorable celebrations. The team at Jimmy’s Jazz & Blues Club put heart and soul into creating a stunning full-service event space with new state-of-the-art production, sound & lighting technologies delivered with outstanding next-level culinary experiences. Our high-touch approach with professional and experienced event staff ensures that everything is tailored to exceed your expectations. To start a conversation about hosting your event at Jimmy’s Jazz and Blues Club, please call us at 888-603-5299, or fill out Jimmy’s Private Event Request Form.