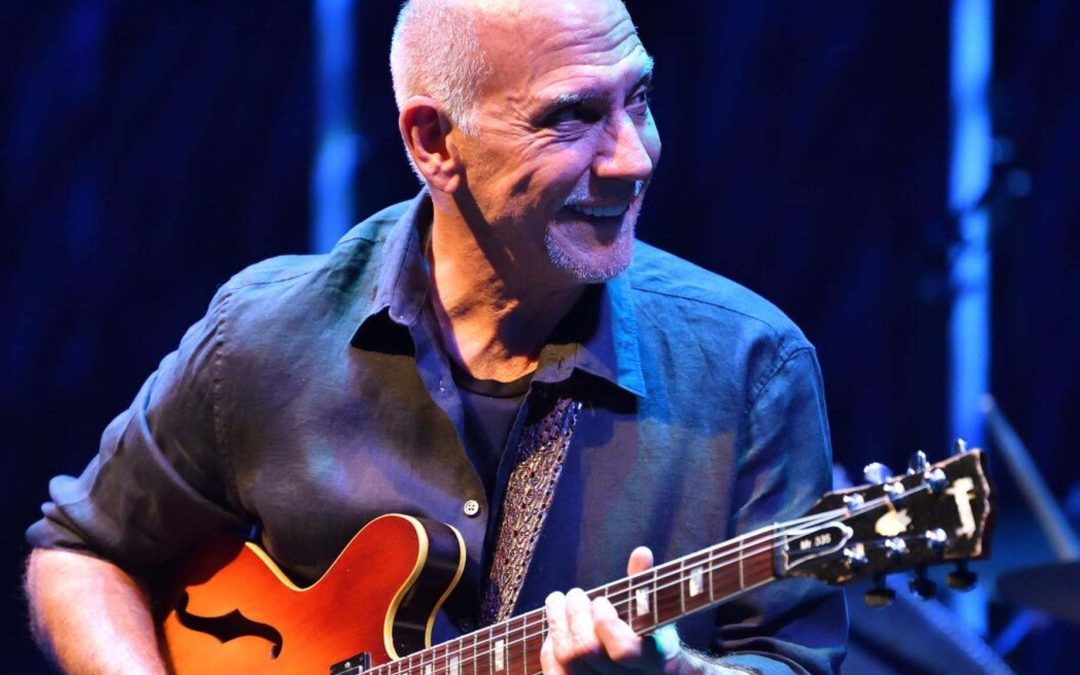 Larry Carlton was named one of the “10 Greatest-Ever Session Guitarists” by Gibson Guitar. Rolling Stone lists Carlton’s tasty ascent on Steely Dan’s “Kid Charlemagne” as one of the three best guitar licks in rock music while Guitar Player Magazine lists it as one of the “Most Influential Rock Solos Ever”. Tickets for LARRY CARLTON at Jimmy’s Jazz & Blues Club, as well as the current list of 2022 & 2023 shows, can be found on Ticketmaster.com and Jimmy’s Online Event Calendar at: https://www.jimmysoncongress.com/events.

“The work of his hands speaks grace and passion and timeless knowledge. Listen, learn and be profoundly moved.”— STING

“Larry Carlton is one of the most prolific guitar players of our time.”— PREMIER GUITAR MAGAZINE

Guitar Legend Larry Carlton established himself from his first recording, With A Little Help From My Friends in 1968. Calls began to increase significantly as Carlton gained distinction for the unmistakable and often imitated “sweet” sound he delivered with his Gibson ES-335. He also broke new ground with his new trademark volume pedal technique, eloquently displayed in his featured performance on Crusader One with legendary jazz/rock group The Crusaders in 1971.

During his tenure with The Crusaders (through 1976), Carlton performed on 13 of their albums. Carlton’s demand as a session player resulted in him constantly being featured with stars from every imaginable genre, including Steely Dan, Joni Mitchell, Michael Jackson, Sammy Davis Jr., Herb Alpert, Quincy Jones, Bobby Bland, Dolly Parton, Linda Ronstadt, Jerry Garcia and literally dozens of others. Among Carlton’s more notable projects as a session guitarist were Joni Mitchell’s critically acclaimed Court and Spark album and Donald Fagen’s Nightfly album.

The twelve months of 1987 brought some of the biggest highlights in Carlton’s solo career. In addition to winning the GRAMMY® Award for Minute by Minute, Carlton received a GRAMMY® Award Nomination for “Best Jazz Fusion Performance” for his live album Last Nite. Coming off the success of two acoustic albums and one live album, Carlton was on a hot streak and entered the studio to work on his next project, On Solid Ground. The all-electric project was Nominated for a GRAMMY® Award in 1989.

Larry & Lee, Carlton’s 1995 collaboration with guitar great Lee Ritenour, garnered him his eighth GRAMMY® Award Nomination. This was followed by The Gift in ’96 and Larry Carlton Collection Volume 2 in ’97. That same year, his virtuosity and reputation secured him a place in the renowned and award-winning Warner Bros. Records’ group Fourplay, when member Lee Ritenour left to head his own label. Carlton has done 8 acclaimed albums for Fourplay, most recently 2015’s Silver.

In 1999, Larry Carlton received his very own spot on Hollywood’s prestigious Rockwalk where he was inducted along with Joe Satriani, Steve Vai and Jimmie Vaughn. The year 2000 started with Carlton putting his singularly superb fingerprints on the new millennium with his star-studded solo release on Warner Bros. Records, Fingerprints.

Carlton’s Four Hands & A Heart Volume One was Nominated for a 2013 GRAMMY® Award for “Best Pop Instrumental Album”. Over the course of his prestigious career, Larry Carlton has done more than 35 albums as a leader, including his most recently acclaimed 2021 album Soul Searchin’ with Paul Brown.

Larry received a “Lifetime Achievement Award” from Guitar Player Magazine at the historical Ryman Auditorium and was presented the “Titan of Tone” Award from Premier Guitar Magazine at the Rock and Roll Hall of Fame. Throughout his celebrated career Carlton has relied almost exclusively on the same Gibson ES-335 that he purchased in 1969. His long association with the instrument earned him the nickname “Mr. 335”.