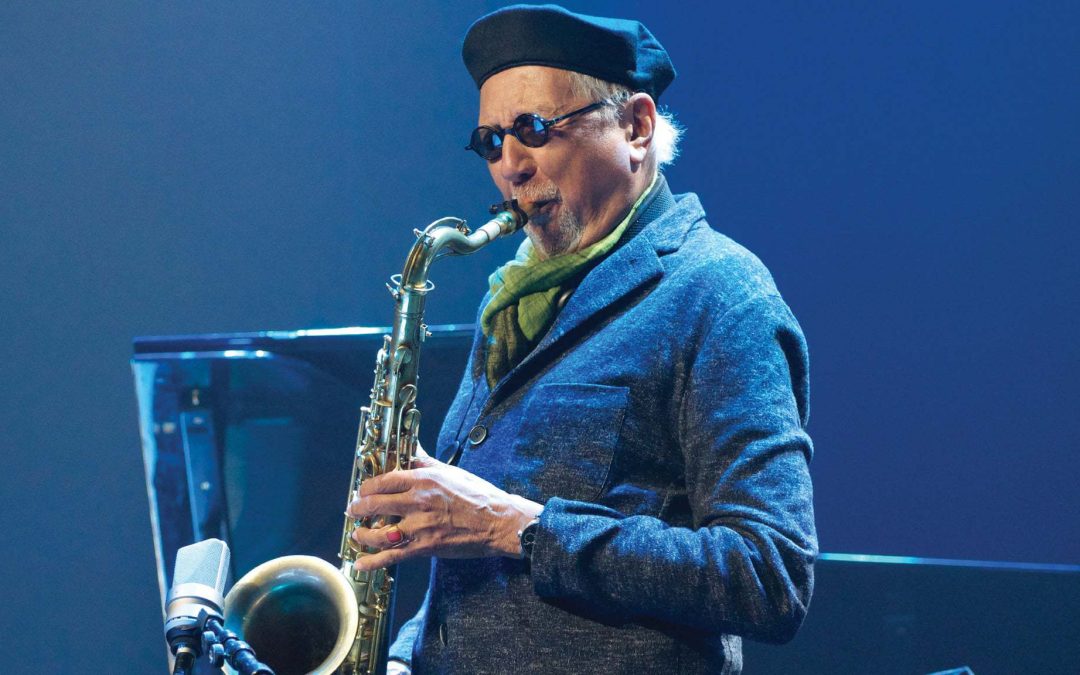 Legendary Saxophone Player CHARLES LLOYD comes to Jimmy’s Jazz & Blues Club with his Acclaimed Trio Featuring 6x-GRAMMY® Award Nominated Pianist GERALD CLAYTON as well as GRAMMY® Award Nominated Guitarist ANTHONY WILSON, who has been a core member of Diana Krall’s quartet since 2001. Tickets for the Charles Lloyd Trio at Jimmy’s Jazz & Blues Club, as well as the current list of 2022 shows, can be found on Jimmy’s Online Event Calendar at: https://www.jimmysoncongress.com/events.

NEA Jazz Master & Legendary Saxophonist CHARLES LLOYD, now in his eighth decade, has never sounded better. The depth of his sound reflects a lifetime of experience. His concerts and recordings are events of pristine beauty and elegance, full of intensely felt emotion and passion that touches deep inside the heart. This is not entertainment, but the powerful uncorrupted expression of beauty through music.

“Lloyd is one of the greats, rather like Joan Miro in modern art, he has no peer save himself. Music of total transport and delight.”— JAZZWISE

“Charles Lloyd, now 84, has lived many lives. Over the decades, the saxophone virtuoso has blurred the lines between jazz and popular music, playing with B.B. King, Cannonball Adderley, The Beach Boys and The Grateful Dead – and he’s still flowing with music.”— NPR

Charles Lloyd was born in Memphis, Tennessee, on March 15, 1938 and was given his first saxophone at the age of 9. He was riveted to 1940’s radio broadcasts by Charlie Parker, Coleman Hawkins, Lester Young, Billie Holiday and Duke Ellington. As a teenager Lloyd played jazz with saxophonist George Coleman and was a sideman for blues greats Johnny Ace, Bobby Blue Bland, Howlin’ Wolf and B.B. King.

Classical music also exerted a strong pull on the young Lloyd. In 1956 he left Memphis for Los Angeles to earn a degree in music at USC where he studied with Halsey Stevens, a foremost Bartok authority. While his days were spent in academia, Lloyd spent nights getting educated on the job in L.A.’s jazz clubs, playing with Ornette Coleman, Billy Higgins, Scott La Faro, Don Cherry, Charlie Haden, Eric Dolphy, Bobby Hutcherson and other leading west coast jazz artists. He also was a member of the Gerald Wilson big band.

In 1964, Lloyd signed with CBS Records and began to record as a leader. His Columbia recordings, ‘Discovery’ (1964), and ‘Of Course, Of Course’ (1965), featured sidemen including Roy Haynes and Tony Williams on drums, Richard Davis and Ron Carter on bass, Gabor Szabo on guitar and Don Friedman on piano, and led to his being voted Downbeat Magazine’s “New Star.”

In 1965, Lloyd formed his own quartet, a brilliant ensemble that introduced the jazz world to the talents of pianist Keith Jarrett, drummer Jack DeJohnette and bassist Cecil McBee. Their first release together was a studio recording, ‘Dream Weaver’, followed by ‘Forest Flower: Live at Monterey‘ (1966). ‘Forest Flower’ made history as one of the first jazz recordings to sell a million copies, and the album’s firsts continued as it became a stunning crossover success that appealed to popular mass market audiences and gained heavy airplay on FM radio.

The Charles Lloyd Quartet was the first jazz group to appear at the famed Fillmore Auditorium in San Francisco and other rock palaces and shared billing with Jimi Hendrix, Janis Joplin, Cream, the Grateful Dead and Jefferson Airplane. In 1967, Charles Lloyd was voted “Jazz Artist of the Year” by Downbeat Magazine, and the Quartet was invited to tour the world.

At the height of his career in 1970, Lloyd disbanded the quartet and dropped from sight, withdrawing to pursue an inner journey in Big Sur, the wild haven that had previously attracted other artists and seekers including Robinson Jeffers, Langston Hughes, Henry Miller, Lawrence Ferlinghetti, Jack Kerouac, Jean Varda and Jamie DeAngulo. Despite recording several albums during the 1970s and occasionally appearing as a sideman with various rock groups, he practically disappeared from the jazz scene. During the 1970s Lloyd played extensively with The Beach Boys both on their studio recordings and as a member of their touring band.

It wasn’t until 1981 that Lloyd moved to break a decade of silence in the jazz world when a remarkable 18-year-old French pianist, Michel Petrucciani, arrived in Big Sur. Lloyd was compelled to help introduce this gifted artist to the world. This led to U.S., European and Japanese tours in 1982 and 1983 with Petrucciani on piano, Palle Danielsson on bass and drummer Son Ship Theus. British jazz critic Brian Case called Lloyd’s return “one of the events of the 1980s.”

Lloyd made his first recording for ECM Records, ‘Fish Out of Water’ in 1989. More than thirty years later he is still with the label, and still in search of the “sound” and the truth. From 1989, Lloyd toured actively and recorded for the ECM label. Noteworthy albums include ‘Canto’, ‘Voice In The Night’, ‘The Water Is Wide’, featuring Brad Mehldau, John Abercrombie, Larry Grenadier and Billy Higgins, ‘Lift Every Voice’, (featuring Geri Allen), and the live ‘Rabo de Nube’ with Jason Moran, Reuben Rogers and Eric Harland. ‘Rabo de Nube’, captured “live” at its inception, was voted #1 recording for the 2008 Jazz Times Reader’s and Critic’s Poll. ‘Mirror’ (2010) has already been called a “Charles Lloyd classic.”

At 84, Lloyd remains a vital and creative force in the world of music and arts.

CHARLES LLOYD TRIO Tickets & 2022 Schedule of ShowsJimmy’s Jazz & Blues Club’s 2022 Schedule of Shows now includes 9 NEA Jazz Masters, 51 GRAMMY® Award-Winning Artists, 45 Blues Music Award-Winners, and a comprehensive list of talented musicians with 575+ GRAMMY® Award Nominations amongst them. Tickets for the CHARLES LLOYD TRIO at Jimmy’s Jazz & Blues Club, as well as the current list of 2022 shows, can be found on Jimmy’s Online Event Calendar at: https://www.jimmysoncongress.com/events or on Ticketmaster.com.