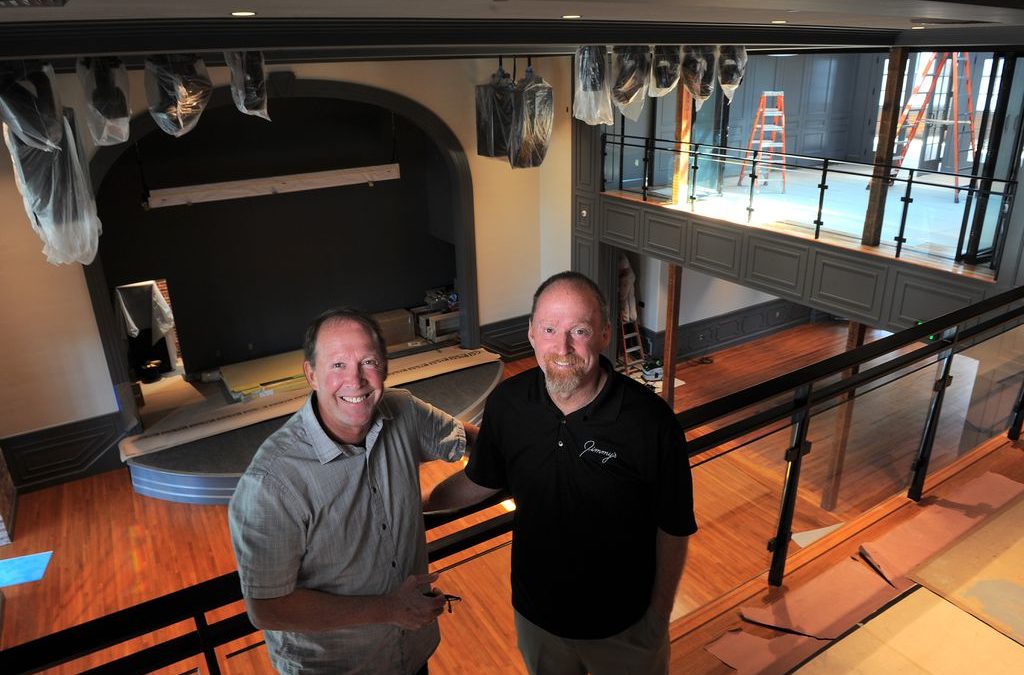 PORTSMOUTH, N.H. — They were going to name the place Elle’s, after their mother. But when Michael and Peter Labrie fielded an objection from a certain magazine, they changed course and named their new nightclub and restaurant Jimmy’s, after both their father and brother.

The elder James Labrie, who died five years ago, was a prominent New Hampshire businessman and philanthropist. Jimmy Jr. died 35 years ago in a high-speed motorcycle crash. He was still in his 20s.

“My father loved Arthur Fiedler,” says Michael Labrie, walking through Jimmy’s Jazz & Blues Club recently as a construction crew hustled to prepare the venue for its official opening at the end of the month.

For their high-profile new venture, the Labrie brothers have chosen a third path. With a full slate of concerts including Christian McBride, Mavis Staples, Charles Lloyd, and the Blind Boys of Alabama, Jimmy’s is positioned to be a destination for renowned jazz and blues musicians, with state-of-the-art audio and visual technology upgrading a historic downtown building. 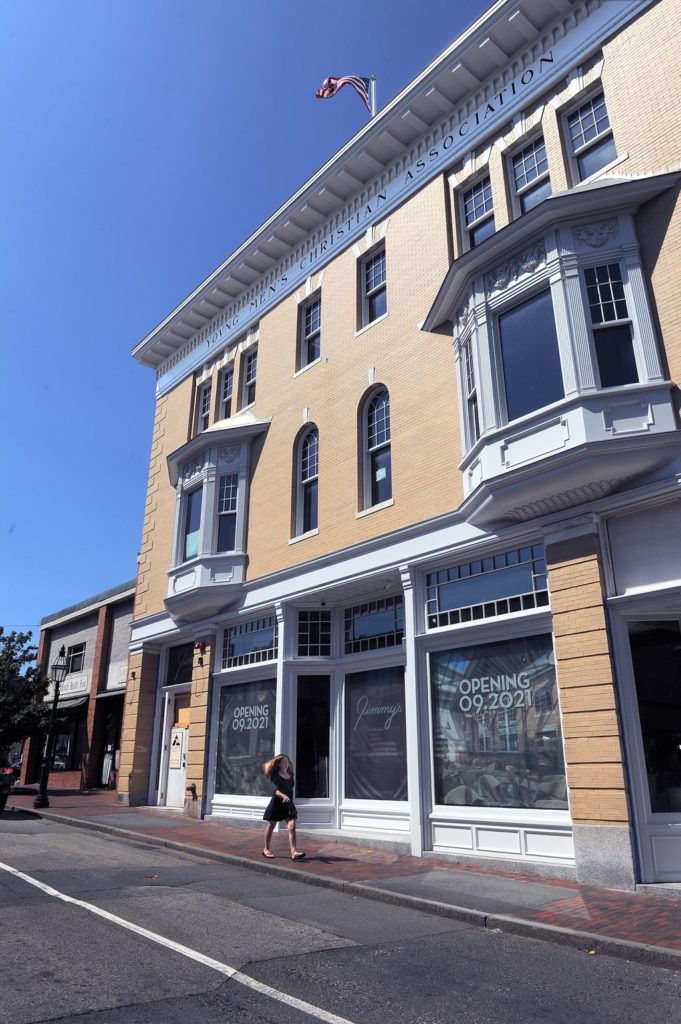 More than four years in the making, with an investment that the brothers estimate at $20 million and counting, it’s an ambitious undertaking. Judging by brisk early ticket sales — some shows are already sold out — there appears to be pent-up demand, even with the pandemic persisting. (Proof of vaccination or a negative COVID test within 48 hours will be required when the club opens.)

The goal is to create “the best listening room in the country,” says Michael Labrie.

The Labrie brothers already own the River House in Portsmouth and the Atlantic Grill in Rye. With Nathan Varney overseeing the kitchen, the Jimmy’s menu will combine New England seafood and New Orleans-style cooking.

On the music side, industry veteran Suzanne Bresette is handling booking duties. Her experience in the business goes back to days of the Boston Tea Party, which led to close friendships with rock stars such as Gregg Allman. After years in the advertising world, she’s recently produced special events for the New York City nightclubs Smalls and the Cutting Room.

“I’ve made a lot of friendships over the years,” says Bresette, mentioning the jazz organist Joey DeFrancesco (who will play two sets to open the club on Sept. 30), and blues harmonica master Charlie Musselwhite (who will share the stage with Elvin Bishop on Oct. 13).

“They know I’m passionate about the music, and about the artists being treated properly,” Bresette says. She will also serve as chair of the Museum of New Art, a first-floor gallery set to open soon with a one-man show by the German painter Markus Linnenbrink.

The overall goal is to establish a new cultural center for New Hampshire’s Seacoast region, say the Labries. When they were young men (Michael is now 60, Peter 52), they appreciated the fact that their hometown had a lively music scene.

Peter rattles off the names: “The Dolphin Striker, the Rosa, the Press Room, the Elvis Room, Club Spin. … It wasn’t if you were coming to see music in Portsmouth, it was where.”

These days, an hour south in Boston, what was once a robust scene for live jazz has dwindled to a small handful of stages. Scullers Jazz Club returns in October with shows on Friday and Saturday nights, while the Regattabar remains closed as of this writing because of COVID-19.

The Jimmy’s location on Congress Street is a landmark. Originally opened as one of the oldest YMCA facilities in the country — an upstairs basketball court once featured Dr. James Naismith’s peach-basket hoops — the first floor of the building later served for decades as a men’s shop, and then a Japanese restaurant. For years, the top three floors sat empty.

“It was creepy,” says Michael Labrie, “like a time capsule.” 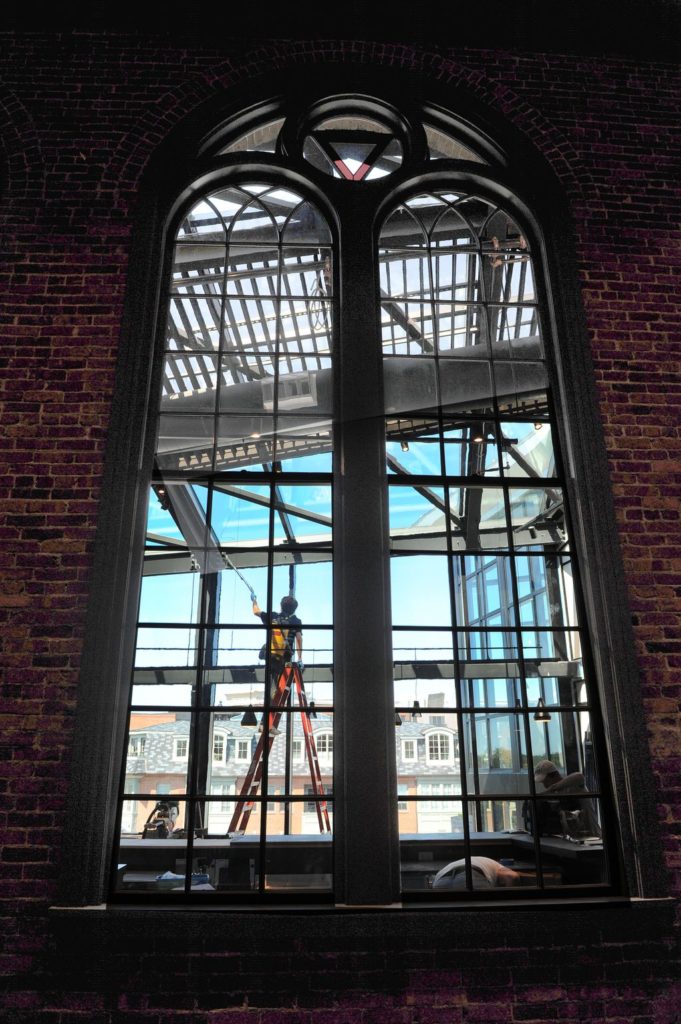 A worker is seen through an arched window at Jimmy’s Jazz & Blues Club, opening in a fully restored century-old building in downtown Portsmouth, N.H. FRED J. FIELD FOR THE BOSTON GLOBE

Newburyport-based architect Andrew Sidford has overseen the complete renovation of the site, constructed with yellow Virginia brick. The venue capacity is about 600; for seated shows, a sellout will be about 350.

What was once the back wall of the building is now enclosed in a glass addition, creating a bar that runs down the left side of the main room, which occupies the bulk of the second floor. Original stained-glass windows featuring the YMCA logo have been fully restored.

On the other side, two levels of anterooms separated by heavy sliding doors will permit various configurations for private parties and exclusive meet-and-greets. Exposed beams and steel trusses and an old skylight add grandeur and a sense of history. The Library and the Billiards Room are named after their original purposes at the YMCA; a sitting area for the artists and their entourages has been dubbed Elle’s Lounge.

The brothers recently returned from a trip to Steinway headquarters in New York City, where they bought a top-of-the-line grand piano equipped with the company’s new Spirio technology — a kind of player piano for the digital age. In theory, the brothers say, Herbie Hancock could be playing the piano at Jimmy’s, and a piano at Lincoln Center would play along.

They’ve also installed professional-grade PTZ (pan-tilt-zoom) cameras and have plans to simulcast many events to subscribers around the globe. That’s one direction the concert industry is headed, the Labries say, and they hope to get out in front of the trend.

Gazing down at the stage from the 49-seat balcony, Michael Labrie mentions one last detail.

“We have a crushed velvet purple curtain coming,” he says. “It’s going to be quite sexy.”

Clearly, they are eager to throw the curtains open for the first time.