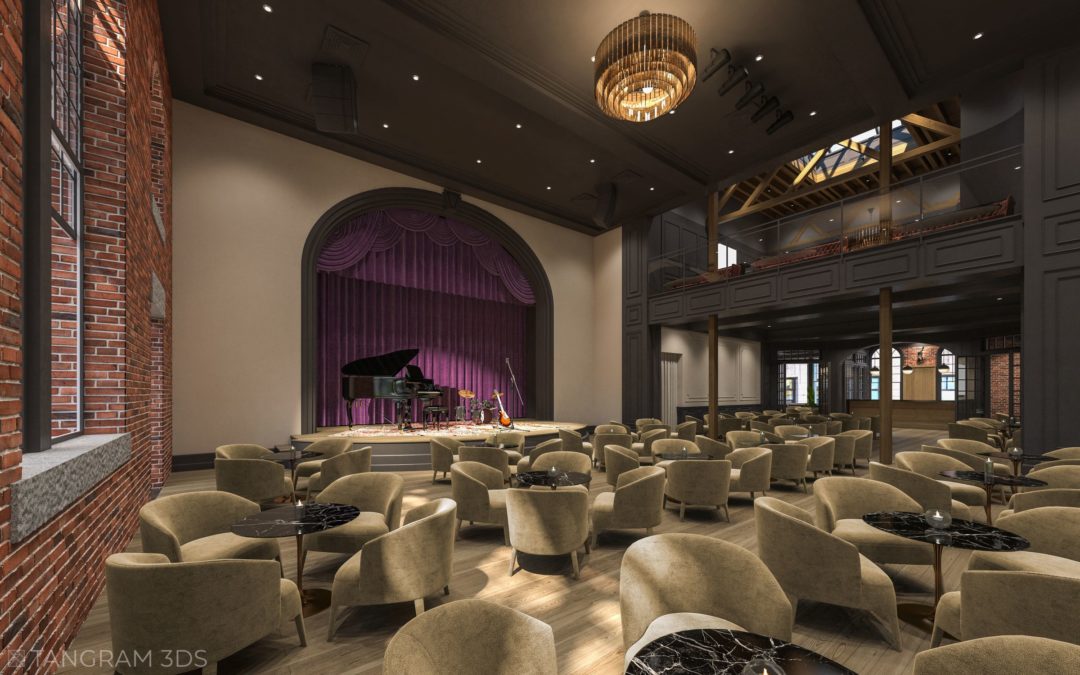 With the recent opening of Jimmy’s Jazz & Blues Club, just north of Boston in Portsmouth, New Hampshire, there is an excitement and anticipation to fill pent-up demand for both performers and audiences. Two local businessmen, Michael, and Peter Labrie—both jazz and blues enthusiasts—saved a landmark turn-of-the-century building to create a Moulin Rouge-style cabaret venue with modern-day technology in sound systems and acoustics. In addition to performing, jazz and blues musicians will have an opportunity to stream and record their sets. With a supper-club concept, a full evening’s entertainment will offer both legends of jazz and current jazz leaders, as well as upcoming talent.

Managing director of programming, Suzanne Bresette, spoke to All About Jazz about the five years of planning, the concept, and the desire to expand the jazz audience, while giving artists the performance and production support they deserve.

All About Jazz: What was the background circumstance by which this idea for a jazz club came about?

Suzanne Bresette: The building was built in 1905 as a local YMCA, and it was a landmark structure in this community. The idea has been developing for about five years now, when Michael and Peter Labrie, who are local restaurateurs and real estate developers, walked into this building and fell in love with it and had this vision of what it could be, as a jazz and blues club. And Michael had a long-time vision for doing a dinner-club experience and when he walked into this building, he saw the potential for realizing that vision. And that is literally how it started.

But they definitely also wanted to open a club that offered incredible music, incredible sound and acoustics and cuisine, and an exceptional experience. They want everyone to come and to truly have a world-class experience.

AAJ: As they come from a business background—where did their interest in jazz develop from?

SB: They have been passionate music lovers since they were children. Michael—jazz, and Peter—blues. But the origins of Jimmy’s came after Michael returned from a visit to Paris and its clubs, when he was in his twenties. Michael returned wanting one day to own a jazz supper club. Jimmy’s is the fulfillment of that dream. And they both had a strong desire to support music and the artists, while enriching their community.

AAJ: How did the supper-club concept come about as a format for a jazz club?

SB: It is a supper-club concept and there will be a full meal served before the show. The chef Nathan Varney is from New Orleans, been on staff for a year working on the menu, southern cuisine, and working on the whole concept of the restaurant.

AAJ: As jazz needs to find an audience, how did you evaluate the current age groups and demographics of the Portsmouth, New Hampshire area?

SB: Very early on, when I became involved, we did some surveys and actually had some support from one of the major promotion companies. The survey done showed that there was a lack of jazz music—from Boston north and Portland (Maine) south—and there was a large under-served demographic that fits the demographic of the jazz artist. They fit the demographic from a financial perspective, age perspective and cultural perspective—there were a number of factors.

AAJ: What are your thoughts and expectations for attracting new listeners to jazz in the area?

SB: One of the things we recognized from the very beginning is that there was going to need to be a certain level of education about jazz and blues music. And we have really focused on that with our marketing and our social media and really informing people about the artists who are coming, the success they’ve had, and what they’ve accomplished as artists, and providing clips of their music. And it has worked out really well because we already have nine sold-out shows.

But we recognized that this we had a responsibility to inform the public, and we were going to have to take it on. And we want to support jazz and we want to strengthen jazz music and expand the listener and fan base of jazz.

AAJ: I understand that a superior sound system is often as important an investment, in a modern jazz club, as the physical venue itself. Can you talk about Jimmy’s sound system?

SB: We invested more than a million dollars on it. We have Acoustic Technologies ALA speakers, which are premier speakers, and a Yamaha soundboard. We also have a new Steinway piano and are working very closely with Steinway with some new technologies. They came up to our room and reviewed all our specs and acoustical design and back-line information.

AAJ: With a state-of-the-art sound system, do you plan on recording performances?

SB: We’ve actually formed an alliance with Steinway, and they will be helping to promote that Jimmy’s will be recording some music for them. We have the great jazz pianist Sullivan Fortner coming on October 8—he’s one of Steinway’s jazz masters and they’re going to document some of the shows of Sullivan playing on this piano. And he’s going to be part of their Steinway’s documentary.

In conjunction with the club, we’ve actually built a complete production studio. We have the sound system and the board for the room itself. And we have various side rooms—lounge areas—in the club as well. We have large flat screen TV’s in all those areas and we’ll be streaming, real-time, to all these flat screen TV’s during the performances.

We are also going to be recording all the shows. The production studio has a separate board and Pro Tools system (music software) and we have a PTZ (point, tilt, zoom) whole camera system and lighting for production. Our goal is to be producing albums that are live from Jimmy’s.

AAJ: With this superior sound system and recording and production studio, it seems like it presents a significant opportunity for jazz musicians to capture their live performances.

SB: We are trying, in doing all this, to support the artists. We want to work with them. We want them to be properly compensated. By January of 2022, we want to be streaming, and we’ll be sharing all that revenue with the artists.

AAJ: It sounds like you have set a high-bar for all the components involved in a jazz club—the performance stage, sound system, recording and production and social media and streaming.

SB: The reason we’re waiting until January of 2022 is that we want the highest level of production, so that we’re really doing these artists justice when they’re streaming.

AAJ: What an incredible opening line-up. For October and November alone you’ve got legends like Randy Brecker, Charles Lloyd, Steve Tyrell and Mavis Staples, along with contemporary jazz musicians like Christian McBride, Joey DeFrancesco and Kurt Elling and also new talent as well. I’m thinking of how excited the late George Wein (founder, producer and director of the Newport Jazz Festival) would have been to see your club.

SB: Just a few months ago, we (organization promoting Jimmy’s) thought about that, wouldn’t it be great to get George (Wein) up to the club. I wanted him to see this club. He has been such a beacon of light for jazz for so long—with the Newport Jazz Festival and his total commitment to jazz. I would have loved that—it would have been awesome.

AAJ: Along that same conversation, you do have the brilliant bassist and now artistic director of the Newport Jazz Festival, Christian McBride, and his band Inside Straight opening the club along with the Joey DeFrancesco Trio the night before—there is a continuity to the legacy of Wein represented at your club.

SB: Christian McBride is coming with Inside Straight and Peter Martin can’t wait to play this piano, and of course Warren Wolf will be on vibes. And Christian is also doing his radio show( weekly Sirius XM Radio show) opening night, broadcast live from Jimmy’s stage with Joey DeFrancesco.

AAJ: It seems like an obvious “connect the dots” to talk about musicians playing in New York and Boston, and then coming directly to your venue as well?

SB: Yes—absolutely. We are getting strong support from New York. So—yes—the musicians in New York are so excited to be coming here and playing on this stage, with really good sound, great acoustics in a really good environment with an enthusiastic audience. We’re motivated by our passion for the music and we want to enrich our community and also support jazz and help it to grow.

Article Can Be Found Here: https://www.allaboutjazz.com/two-brothers-a-landmark-building-and-a-vision-for-a-jazz-club/